China is one of the biggest developing countries in the world. It has appeared as a powerhouse in terms of human resources. It has always been world’s factory for low-end products. Even though the number of university graduates keeps increasing rapidly year by year, the vacancies in both Chinese and foreign invested companies still cannot be filled. There is a significant gap between supply and demand in terms of skilled labours. Between the year 2003 and 2008, even though 15.7 million people graduated from different Chinese universities, the McKinsey Global Institute estimated that only 1,2 million of them will be fit for jobs in multinational companies. Also, there is not only difficulty in finding fine-tuned and skilled resources but retaining them is problematic too. Having shortage of skilled workers is one issue and retaining the trained ones is one whole other challenge in current Chinese market. Moreover, turnover of employees costs a lot to the companies, starting from replacement hire to training the new ones to making them fully productive like the previous ones. This process of runaway turnover and replacement hire can drain on the productivity and morale and can have devastating effect on organization’s finances, total efficiency and productivity.

Given the problem of ageing population and rising labour cost, maintaining the quality of labour and speeding up the process of training and transformation is the need of the hour. Specially, there is acute shortage of professionals at senior manager level.

The final aim in this scenario should be coming up with the driving forces that help to retain the trained skilled resources in long term. Not only the number of employees with training and skills is less but also the enterprises inclined towards industrial upgrading lack what it takes to achieve the same.

Based on different studies and reports it is appropriate to say that China needs to put forward Macroeconomic transformation and structural change in order to bridge the gap for skills mismatches in the Chinese labour market.

Current scenario and challenges: (Why is skilled labours need of the hour?)

Reasons for Retention Problems in China:

There are four main reasons due to which MNE’s are facing problems to attract and retain qualified managerial staff in China. The reasons are listed below:

Study on Retention in China:

The Society for Human Resource Management (SHRM) and Development Dimensions International (DDI) worked together for studying the Employee Retention issue in China in the year 2007. Two sponsor (BMR magazine and ChinaHR.com) provided additional support in recruiting participants for the survey involved.

Online surveys done in various organizations present in China for various job profiles in different regions of the country. Apart from the online survey, one-on-one telephone interviews were also conducted with Human resource professionals as well as the employees to gain insights and point of view from them.

It was found from the whole process that the expected tenure for new-employee by the HR professionals were visibly lower for China as compared to other regions of the world. Also, after talking to different employees it was found that even their expectation was the same. Almost 73 percent of employees who participated had resigned from their previous jobs, and nearly one-fourth (24 percent) had already been to more than three jobs, despite their young age. Also, 22 percent of them agreed that they were likely to change their job in the coming year. From the research, it was found that turnover has become an accepted practice by that time among Chinese employees.

The most concerned finding from the whole study was that leaders in organizations were inclined to leave irrespective of their level. Their loyalty towards the organization was even lesser than professionals and individual contributors. It was also found out through the study that many employees felt that things like great company leadership, nice manager, or a creative/ fun workplace culture were missing from the most of the organizations leading to employee dissatisfaction and prompting them to switch jobs.

The picture given below lists down the most common reasons for low retention among Chinese employees in order from the most important to the least important reason according to the study performed: 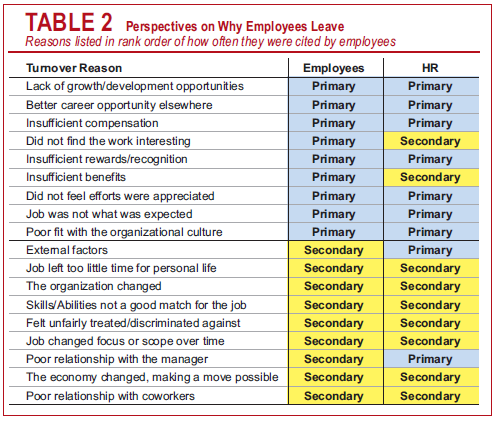 It can be seen that the most common reason stated by the HR professionals and the employees themselves was “lack of growth and development Opportunities” in the organizations. Lack of options for personal career growth is leading to impatience among the skilled and trained employees who know their potential and worth.

The data showed that there is high salary competition in the different regions that is leading to turnover. The potential youth when gets better offer from the competitors, they tend to switch their jobs.

It was also found that occurrences where the official and the actual reason for the turnover differed. Well, this scenario is not only in the case of China. The Selection Forecast 2007 found that in the U.S. and Canada more than half of both staffing directors and hiring managers gave external factors as primary reasons for turnover compared to 10 percent of job seekers. It has been observed that employees usually give external factors as their official reason for leaving since the real reason is related to an issue they are not willing to expose.

Since it is always the best to build the base/foundation for any major transformation, in order to tackle the unskilled labour issue, China needs to start work from the very granular level which would be school and universities.

Educational institutions should start with school-business cooperation which can build a pathway for students to start understanding the enterprises needs as a part of their curriculum and accordingly adapt. In-depth cooperation between schools and firms should be promoted so that training of students can be carried on the basis of market and enterprises’ demands. Also, a certification system with trustworthy standards in professional and technical skills can be introduced in vocational education chain for different job requirements. This certification process can help in setting standard and right expectations between the trainees and the enterprises. This can also help in reducing talent waste that could happen due to skill mismatches.

Migrant workers and low skilled workers should be encouraged to undergo training and workers’ access to vocational training should be increased.

Multinational companies and enterprises should have a training program for all the new employee based on their job requirements. Moreover, government can help speed up the process by providing government subsidies to enterprises as incentives.

Since there are significant regional differences in types of skill required and the percentage of unskilled labour is pretty high, it is necessary to give more subsidies for helping rural migrant workers gain modern skill sets and upgrade their knowledge base.

Apart from these, formation of labour organizations should also be promoted that can help for better quality on-the job training.

A portal where enterprises get thoroughly involved in industrial training can help a lot.

The whole socio-economic and educational culture should be transformed so that it facilitates and promotes forced labour up gradation, entrepreneurship and industrial training participation in pursuit of equal opportunities, social security and other benefits or incentives.

Also awareness about this ongoing skill gap issue should be spread and prompt and suitable response is needed from government in collaboration with business and academia.

One of the main reasons for low retention of skilled labours is job dissatisfaction for the employees.

Things like compatible work group or team, good leadership team, organization’s culture, engagement with work group, cooperation, efficiency and ease at resolving conflicts are some of the factors that lead to job satisfaction for employees working in a organization and lead to increase in retention rate.

Employees’ job issues should be addressed at the right time and in the right manner to build the foundation for trust and talent development. Opportunity for accomplishment and nature of work both play major roles in determining the retention in a company by the employee.

In China, the loyalty to company is found to be lesser in the leaders as compared to the employees. 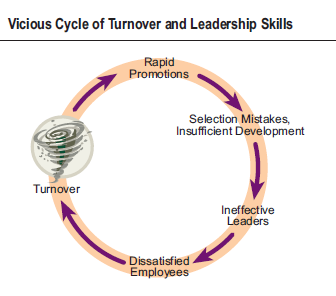 The educational system of China has recently started to include what it takes to meet the global competition in its academia. The students still need to be trained well when they enter corporate world and moreover they need to maintain their job skills up to date with fast growing economy. Therefore, those who manage acquire technical skills faster tend to turnover for better job opportunities. So, the companies need to start recognizing its employees worth and change their strategies accordingly to retain their valuable employees and valued talent. The data and findings suggest that organizations need to maintain competitive salary structure since compensation alone is not sufficient for retaining valued talent.

According to Hays survey, 37.8 per cent of employers who participated in the survey do not have a retention plan in place with them even though most of them (88.6 per cent) agree with the fact that employees’ turnover impacts negatively on productivity and finance.

According to one Karvard Business review in 2007, 41% of high-skill Chinese professionals preferred working for a Western multinational and only 9% of them preferred a job in a Chinese company. Again when the survey was conducted around second quarter of 2010, it was seen that 44% of them preferred MNCs and 28% of them (increased from 9% to 28%) preferred to work in domestic firm. The Chinese firms along with government should start taking advantage of this inclination of employees towards domestic enterprises and start taking immediate and effective actions to retain their skilled and unskilled employees and should start training the unskilled employees to enhance their man power in technical and professional fields to compete globally.